Warning: Always start a quickbattle after re-starting the game using the new version, before you launch a new campaign – and then exit the game back to the main menu immediately after the loading screen has finished after you have entered the battle-map. You don’t have to play the actual battle but just load it up – this is required in order to launch a campaign in the new version – or the mod will throw you back to the main menu alternatively CTD (crash to desktop) – I’ve had this issue in Game of Thrones: Total War Enhanced in the past and i believe it is caused by too many things on the strategic-map!

It worked fine up until Tyrande got added but after started to require this to be done. Moving over the mod-changes to my other computer solved it with everything up until Tyrande – but after updating with the entire Night Elven strat-map and the rest of the previewed content – it even started to happen on there as well.

Other players have had to do this on the old release – so it could be both due to the map-changes and the computer – as they had old computers and more recent computers would take longer until this started to happen.

– So always start-up a quickbattle, then exit after the loading screen has finished loading – then launch the campaigns – if you exit a campaign you can start another one up immedieately. The mod will crash if you click on the Frozen Throne-campaign and then try to go to the Reign of Chaos-campaign without first starting up the FT-campaign.

1. You need to go into the folder named “Medieval II Total War” and then copy the file named “medieval2.exe” – then rename the copied file to kingdoms.exe. This is needed or the mod won’t launch with Steam.

2. You do need to patch the medieval2.exe and the kingdoms.exe with a program named “4gb patch” found at this link:

3. It’s a program, extract it anywhere on your computer, then run it as an administrator – then browse to both .exe-files inside of the “Medieval II Total War”-folder and select one of them and click on “patch” – then repeat the process with the other one.

4. You need to have just one folder named “WTW” as in “Steam\steamapps\common\Medieval II Total War\mods\WTW – and then You’ll start it by double-cllicking the executable.bat-file of the mod.

5. With the CD instead it would be “D:\Games\SEGA\Medieval II Total War\mods\WTW – and you’ll still start it by double-clicking on the executable.bat-file.

Also, download the MedievalII.Preference-file that i did upload on here & place in main Medieval II Total War folder – replacing the old file there. This will enable you to play defensive battles in hotseat, as well as prevent a bug causing CTD when clicking buildings on the campaign – it will also make FMV’s work.

WARNING: DO NOT PLAY THIS MOD WITH ADVISOR ON, NEVER CLICK ADVISOR – mod will CTD!

The 4gb patch found in the Warhammer: BotET-mod – it’s required for the Warcraft beta to work i’ve been told. I have decided to upload it here so people won’t have to download the entire BotET (Beginning of the End Times) submod for Call of Warhammer.

Patch your kingdoms.exe, and only do it once. It will make all heavy mods work and be more stable. Without the patch you may experience alot of crashes.

So a new temporary download has been uploaded and released called Warcraft: Total War V 2.0. It includes some changes including 37 brand-new strat-map models minimum, changes to the map and especially it gets rid of any giant/dragonflight-unit still in the rebel starting armies, any Farraki scorpions still in the starting garrisions of the Farraki Trolls and of any Fel Hounds/Snap Dragons still in the recruitment of the Burning legion or the Naga – all of these would crash on Windows 10 computers a few seconds after the camera centers on them.

1. Over 37 new strat-map models for the Scourge, Theramore, the Night Elves (all of which are done) and Prince Arthas for Lordaeron, Grand Scarlet Crusaders for the Scarlet Crusade, the Forsaken has gotten their models changed in the way they are used but the faction isn’t final on the map – Undead Sylvannas is the only one with her model now, Quel’Thalas has a new soldier and alive Sylvannas is a unique model shared with Vereesa Windrunner, the Horde has Warchief Thrall – their leader, the Naga has gotten Demon Hunter Illidan Stormrage and Lady Vashj and the Sin’Dorei (Bloodelves) have a new soldier (spellbreakers), a new general (Brightwing Windicators) and Kael’Thas himself has his own model on the map. 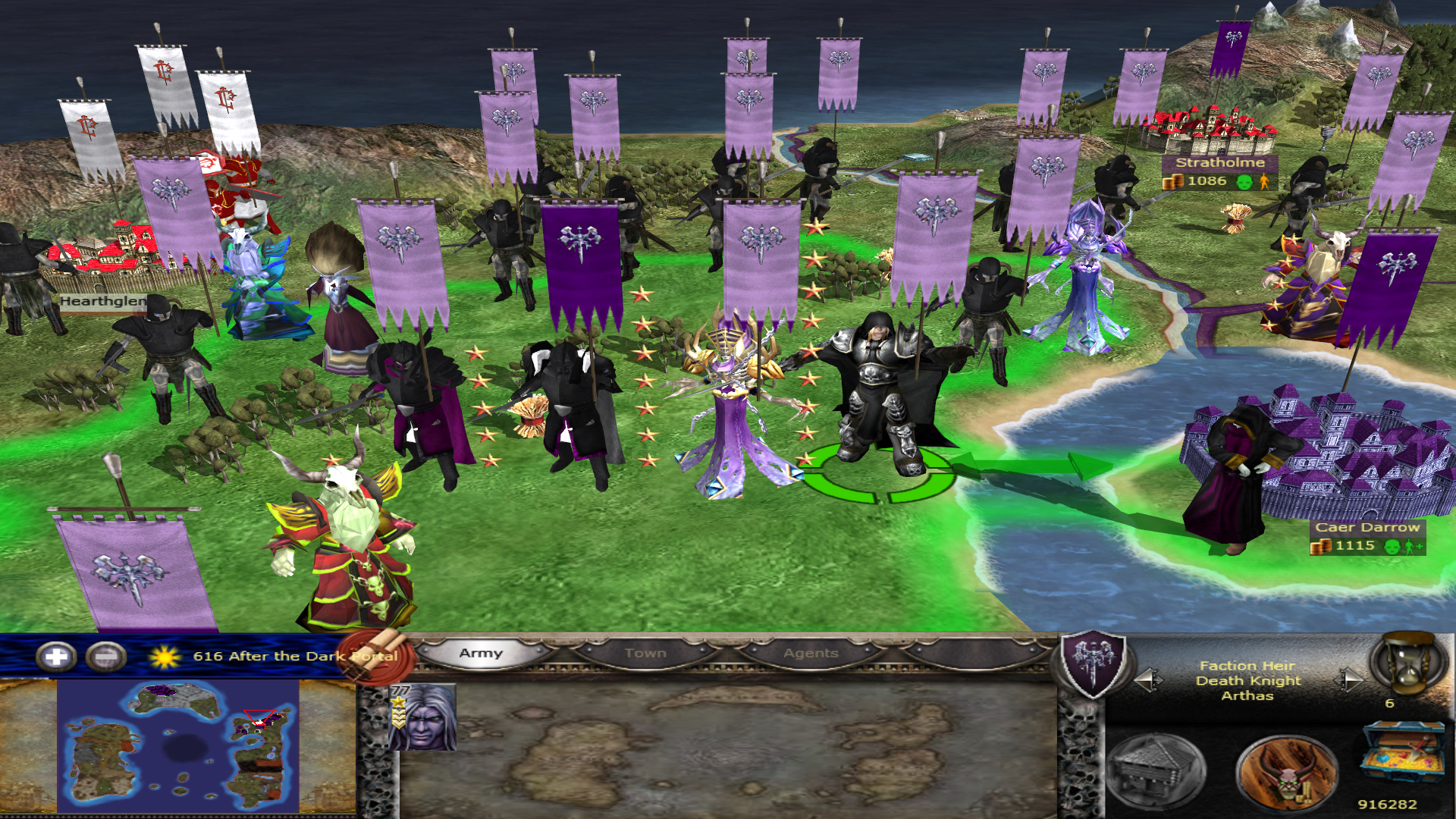 Unique custom character (2) = Lich general (old generic general) in use by all the starting generals that are Liches.

Unique custom character (3) = Necromancer general (old generic soldier) in use by all the starting generals that are Necromancers.

Unique custom character (4) = Death Knight general in use by all the starting generals that are Death Knights.

Unique custom character (5) = Ymirjar Champions in Northrend – still to be done but they are in Northrend so I wouldn’t be able to take a photo with them in it together with the others anyway.

The starting generals all have different models than the adopted generals or generals that you earn after winning battles.

Unique custom character (2) = Archdruid Malfurion – using the most suitable Druid of the Talon-model.

Unique custom character (6) = Raene Wolfrunner – using the unique model that is used as the Night Elven general in battle.

Unique custom character (7) = Cenarius and Remulus, Keepers of the Groove.

Diplomat = Sentinel with red hair in a ponytail and random colors. 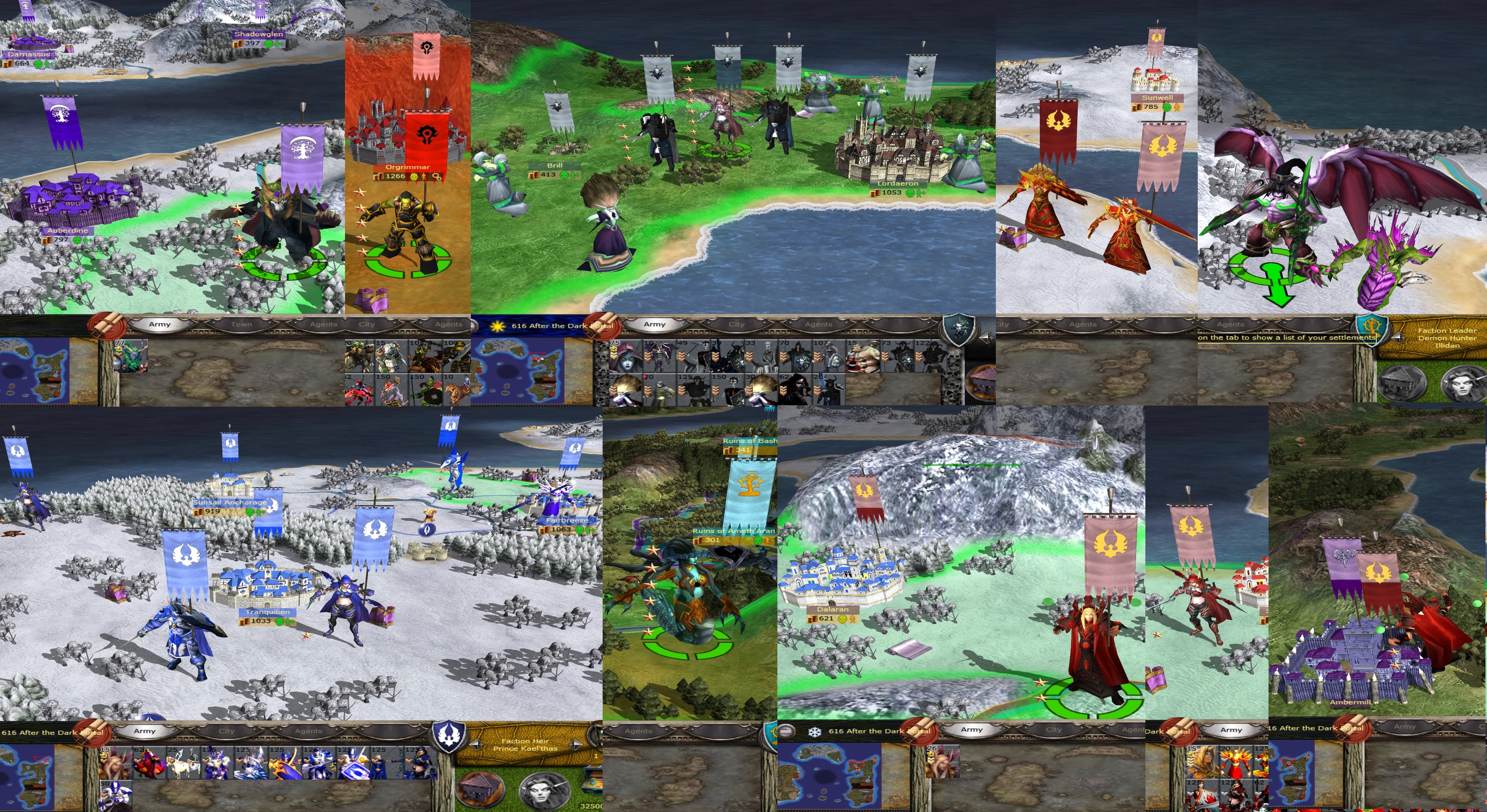 2. All the CTD-friendly units (crash to desktop-friendly) have now been removed for real from the starting garrisons, the rebel armies (they still have portraits of their leaders) and from the recruitment – no more CTD due to these units.

3. Vereesa Windrunner added to the Blood Elves, and Dalaran belongs to them now in the Frozen Throne campaign.

This update isn’t final, and it’s a temporary upload – the real update is not ready yet. This still has enough new content to be worth a try. Enjoy!